Are Electronic Door Locks Safe for Your Business or House 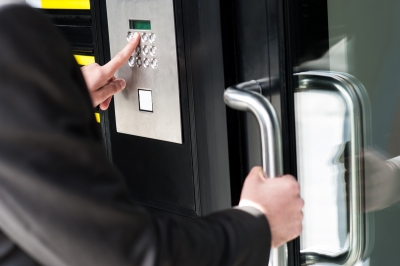 Photo by stockimages via freedigitalphotos.net

This is the era of technology. Every industry and every aspect of the average person’s life is being affected by technology, and if recent happenings are any cursor, technology has now also gotten to the mediums a person uses to move in and out of and secure their home – locks. Until not too long ago, the only locks the typical person knew of were geometric shapes in their doors which they had to put a key through in order for them to get into their house. However, technology has changed locks, and it has done so radically.

The following are some of the latest types of electronic door locks:

• Biometric door locks- Locks that scan the fingerprints of the user in order to authorize their entry.
• Key fob locks- Key fob locks, also known as proximity locks, require the user to carry around a key fob which, when detected by the lock in its immediate vicinity, signals it to open the door.
• Smartphone-controlled locks- These locks use either Wi-Fi or Bluetooth connectivity to allow users to control their door locks via their Smartphones.
• Surveillance locks- Surveillance locks require users to enter codes in order to open them, and also take pictures of anyone who manages to open them and get in.

While it is true that getting past a keyed lock is not a tough task for the typical intruder, it is also true that electronic door locks are often made of subpar materials, making them prone to being broken by intruders, unlike keyed locks such as the impregnable Medeco Maxum 11WC60L, which can take an unprecedented amount of damage. Furthermore, almost all of the locks that use fingerprints, Wi-Fi or Bluetooth tend to cease functioning in the event of a power outage, in which case a person has to use a backup key to unlock their door. The backup key slot in electronic locks can quite easily be exploited by intruders as any person who knows their way around a lock can use nothing but a paperclip to bypass an electronic lock via its backup key slot.

Forced entry is a major risk that comes with keyed locks, but it is also quite possible if a person has an electronic door lock installed in their house door. However, a person can decrease the risk of forced entry substantially by simply reinforcing their door with impact plates that are made of heavy-duty metal.

Are electronic door locks safer than keyed door locks? Definitely not, but they are just as safe as keyed locks, and if a person is tech-savvy and wants ease of access instead of having to search around on their person for the keys to their home door, an electronic door lock is most definitely a good idea.